I was at the DCA airport around 5:40 and checked in for my flight. It was already delayed to 8:40 at the time I was there. At first they wanted to send me with an earlier flight at 5:50pm which got delayed to 6:30ish. And then the UA rep saw only 3 seats available and a very long wait line for that flight and she decided that I cannot make that one. It took only 20 minutes after that to delay that flight to 9:10 then to 9:20.

So very nice customer service rep from United Airlines (UA) booked me on an American Airlines (AA) flight to O’hare which was scheduled to depart at 8:40ish.

When the flight time came the AA flight got delayed to 9:15 so all hopes got lost since there was no way of catching my flight at Chicago. I waited for the nice gentleman to complete the boarding since he was the only one there then he advised to talk to the gate people for UA since the original ticket was with them.

For the ones who doesn’t know DCA, basically everything ends around 9:30. So I caught a group of UA people, who were extremely nice and helpful to me. Although they were about to go home and I was the only passenger there they waited for me to help me fix the situation.

However my flight from chicago to istanbul was operated by Turkish Airlines (THY). They said that they cannot do anything about this flight and they even called THY but the person on the line for THY had no idea what to do. 🙁 it was about 10:20pm and the UA lady booked me to the next flight to O’hare at 5:50PM next day and said at least you’ll have a confirmed seat next day.

Then I went home and tried to call Orbitz to get some help. The only thing that they did is to get a hold to THY representative in Turkey (it took 48 minutes to do that). After they transferred my call to THY, the THY representative tried to help me but couldn’t do anything more than citing that there is no seat available on the next istanbul flight from Chicago.

I offered him to book me to NY to Istanbul flight but he was clueless. He tried to help me but nothing has been done. He called me back and forth from Turkey couple of times ending with no result.

I also tried to call THY NY office numerous times. On each attempt my calls went to a voicemail that has no recordings to indicate that the line is indeed a THY line.

It was 2 am. I was dead tired and went to sleep. Woke up at 7am. Called the orbitz again to get a refund and book another flight to Turkey this time without THY. Of course unless you don’t want to lose half of your money you spent on the ticket, this is not an option. At some point of the orbitz agent offered me 200+ dollars to book the flight…

Orbitz agent put me back into contact with THY (another 45 mins). This time a better agent from THY tried to help and I transferred me to someone who actually knows what she is doing, after telling her the story all over again, she promised me to call me back in 15 mins. I got a call from another THY agent 30 mins later. It was about 10:15 AM already. He knew what the problem was and he booked me to NY – istanbul flight which is at 4:30 pm (EST)

I bought an Acela (so called “fast” train) ticket to NYC ($177.00) and got in the train at 12:00pm. I’m currently in the train as I’m writing this. My plan is to catch earliest LIRR train from NY Penn station to Jamaica station and take Airtran from there to JFK.

I have absolutely no hope to catch the JFK-Istanbul flight unless it is delayed for an hour. But nobody can say that I didn’t try.

Morale of the story:

This must be the new definition of the desperation. Poor Microsoft. I’m kinda speechless…

Tomorrow is ride to work day. So drivers, please be extra careful tomorrow.

Please take a second look for motorcycles. Thank you! 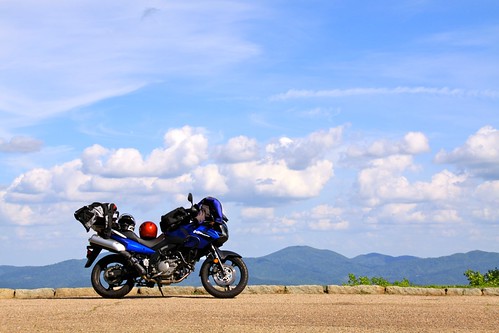 V-Strom on the Blue Ridge Parkway

So I finished the skeleton of my plugin and I just tested, it’s working. 🙂

It basically sends a twitter update to my twitter account (That I’m not using at all) whenever I publish a new article entry on my blog with a link to the new entry. Also the link to the entry is converted to tinyurl. I do that with php cUrl libraries. This is not the most elegant way of doing it, I’d rather open sockets and do it but I don’t have much time to spend on this 😛

The plugin currently works, I know how to send a message each time my article is published, I know how to add an admin sub menu to the Settings main menu.I also know how to display a proper form to do admin settings for my plugin.

I still don’t know how to save my plugin’s variables to the wp_options table. There is way, I know, but I didn’t have time to investigate it. This is to save/edit the twitter username/password and also maybe the twitter update message to the WP database so that it’s not in the cleartext in plugins. (Easier for dummies :P)

Next version will handle these issues, then I will release it to the public. 🙂 (btw, there are at least 5 plugins already doing this so you really don’t need mine)

I think I’m a documentary freak… I watch a lot of documentaries of all types. Although I believe that “the reality is for the people who lack imagination”, I certainly love documentaries. Mostly I watch titles that are about the things that are not going well in the world. And I feel depressed afterwards… But I still like knowing things that most of the people have no idea or ignore or never want to know.

While recommending some of the documentaries to my close circle, I usually hear the argument that the documentaries are sometimes very biased, but hey, it’s up to you to decide at the end to have an opinion… No one is forcing you to believe blindly. So whoever comments on documentaries being biased under this topic, I will not approve it if you really don’t come up with a good explanation 😉

Also, Netflix is a great place to “rent” them since they carry a wide variety. So if you are in the US of A, and like documentaries, I highly recommend Netflix. And since Netflix likes to stream the titles that nobody likes to watch, usually there is a high chance that you will find a documentary without even receiving in the mail 🙂 For other people around the world, there are always torrents 😛 😛 Information is contagious, and you should get contaminated with every kind of it, even by illegaly downloading them hehe. (Juuust kidding)

So here are some documentaries I enjoyed for the last few years in no specific order.

I’m leaving out some major documentaries like Planet Earth, etc… since a lot of people already know them. I’m also open to the suggestions in the comment section.

I’ve been having hard time to understand the CDR reports from FreePBX. There were a lot of duplicates, lots of couple of second connection entries, etc… All I needed is to set a criteria and see the reports related to that criteria.

So here is how it goes:

So I came up with this perl script. If you need similar stuff, please don’t hesitate to use it.

Here is a little howto:

First you need to edit the script to fit your database settings, it’s pretty self explanatory in the script itself.

Lastly, the way I use this script is by running from two cronjobs. One at night for the last 24 hours, and one every 1st day of the month for the monthly reports. It’s up to you how to use it 😉

I just watched the trailer, it kind of seems promising. It looks like it will be released for PC and also for Wii. The game consist of 5 chapters. It will be out July 7th and there is a pre-order link on the front page. The price tag is ~ $35.